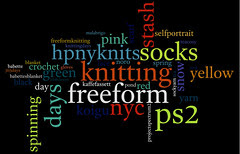 I do I do I do!!! Rowan Felted tweed. It is a lovely yarn to work with, and an easy pattern. I am experimenting a bit with shaping adding additional mini cables in the next few rows. I also added a ribbing. I want it to be a bit longer. 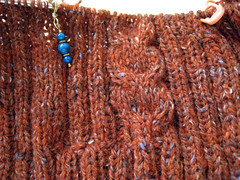 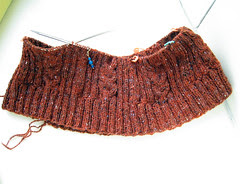 Felted Tweed gets some quality time

"007" from an old Rowan book. (number 12). Its a Louisa Harding design. Doing it in the round. will it work? All modified for yarn.
Rowan Felted Tweed in "ginger" which is kind of rust.
Right now its on a size us4 circular addi. 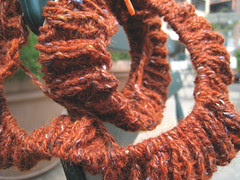 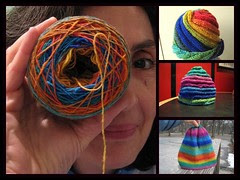 All three hats from the same skein.

Sit n Knit NYC, (we rock!) Kipped in Central Park! It was a nice day, if a bit humid, but it did not stop 60 of us from spreading out our projects. We were such a curiosity, that some tourists took pictures and videos of us. My T-shirt that said "I love to knit" was not the kind that would get you a date, but got lots of chuckles... In true NYC spirit we had an after party in a bar. Minty, (who was the official event photographer, links to more photos soon) did warn me that alcohol consumed in a cool bar turns you a notch happier when you are back in the scorching sun, but just one frozen margarita??? 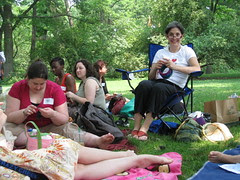 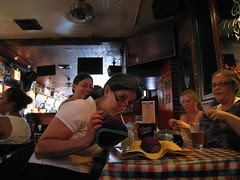 I finished the baby Noro Hat for a friend's baby.
I did not make changes to the pattern, just knit in a thinner yarn with smaller needles.
0.25 of a skein of Noro Sock yarn
Noro Hat
Size US3 addi cir.
It took two days. 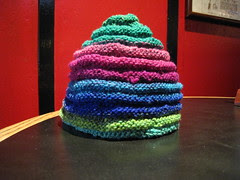 This is a Flickr badge showing photos in a set called Favorites. Make your own badge here.